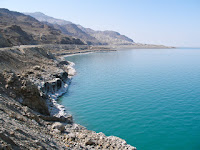 The Dead Sea has served as the backdrop to some unforgettable events on the world’s stage of history: the patriarch Abraham fought a war there, David hid there from King Saul, the prophet Ezekiel had visions there, the story of Masada happened nearby, and Jesus was baptized there by John the Baptist.

The War of the Four Kings Against the Five
The book of Genesis refers to a war conducted by four kings against five at the Dead Sea: “All these were joined together in the vale of Siddim, which is the salt sea” (Genesis 14:3; all Biblical citations on this page refer to the King James Version). In the course of this war, Lot, Abraham’s nephew, was taken captive. Abraham, whose name was still Abram at this point, went out to pursue the captors and bring Lot home.

The phrases “Valley of Siddim” or “Siddim Sea” come from the root s.i.d., which means clay, tar or pitch, materials that are typical of the Dead Valley region. The book of Genesis also notes that two of the kings fell into the pits typical of the area during the war: “And the vale of Siddim was full of slime pits [tar pits]; and the kings of Sodom and Gomorrah fled, and fell there; and they that remained fled to the mountain” (Genesis 14:10).

David Hides from King Saul
Many years after Abraham fought in the area, David, who would later be king of Israel, fled there from King Saul: “And David went up from thence, and dwelt in strong holds at Ein Gedi” (I Samuel 23:29). This area was also where the cave incident took place: David entered a cave where King Saul was sleeping and cut off the corner of his outer garment, thereby proving that he had no intention of harming his king.
The Prophet Elijah and Jesus’ Baptism
Elijah, one of the prominent prophets in Judaism and a religiously significant figure in Islam and Christianity as well, parted from his disciple Elisha and ascended to heaven in a chariot of fire drawn by horses of fire: “And Elijah said unto him, Tarry, I pray thee, here; for the Lord hath sent me to Jordan. And he said, As the Lord liveth, and as thy soul liveth, I will not leave thee. And they two went on (II Kings 2:6).

The spot where Elijah ascended to heaven in a whirlwind would later be considered by the Christian tradition to be the spot where John baptized Jesus. Today, the location is known as Kasr Al-Yahud: “These things were done in Bethabara beyond Jordan, where John was baptizing” (The Gospel of John 1:28).

Biblical Names of the Dead Sea
The Dead Sea goes by many different names in the Bible: